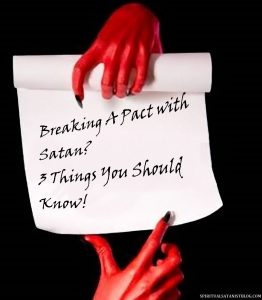 What if you wanted to break your pact with Satan? A reader of the Spiritual Satanist Blog asked:

“What if you do dedication really young then break a pact and move on to other occult paths? Will Satan understand your choice? Will there be revenge from his side?”

Great question! I have been asked this question before a few times and my answer is always the same: It’s ok to change your mind.

Many times, people find Satanism in their youth. A lot of Satanists start their journey by exploring Satanism before they turn 20. It’s a common thing for people of that age to be curious and want to explore the possibilities that are out there. They are seeking identity and a sense of self. A spiritual path allows you to explore that on your own terms.

Many feel that creating a pact with Satan is a goal, a final end on the road to becoming a Satanist. But as many of you may know, the decisions we make when we are younger don’t always work out. Circumstance change, a person evolves and may decide to leave the path of Satanism.

So there are three things you should know about breaking a pact with Satan:

1. A Pact with Satan is an Agreement

A pact with Satan is an agreement with Satan, most often created to show one’s allegiance to Satan either as a servant or as an ally. What you chose to put into your pact is determined by how you feel about Satan and Satanism.

This is why I always suggest to study and practice Satanism for at least a year before you even decide to make a pact. Making a pact doesn’t instantly make you into a Satanist. Without the knowledge that you need to create a pact, the chances that you will be satisfied with your agreement are slim.

Not knowing how you should have made your agreement after the fact is a good reason to re-consider your pact. To avoid having to do this, do your research first and spend time living as a Satanist before you decide to finalize anything.

Satanism isn’t Christianity. In Christianity, there is no pact. You are told that you are destined to be a ‘child of god’ whether you agree to it or not. In Satanism, however, creating a pact is a choice. Being given a choice is important. This choice allows you freedom. And with your new found freedom you may find that Satan and Satanism served you at some point to move beyond the limiting lifestyle that you grew up with.

Some find that Satanism allows them to express rebellion. This is one of the appealing aspects of Satanism – it’s denial of the socially accepted norms of Christian life. But rebellion can only serve you so far, it can only do so much for you before you either absorb it as a part of your growing experience as a Satanist, or you use that as a catalyst to move on to something that you feel is more meaningful.

3. You Can’t Expect Satan to Act Like The Christian God

There are two points to consider carefully: That you entered into your agreement while still holding on to your Christian beliefs and 2: You have not taken the time to study the nature of Satan as a deity. Not knowing what to expect can lead you to imagine all sorts of things. But, if you set aside your expectations, and realize that your pact has served it’s purpose, there is nothing wrong with moving on.

My Personal Experience with Pacts

Personally, I have re-pacted with Satan three times. I made my first pact with Satan when I was just 13. I was so 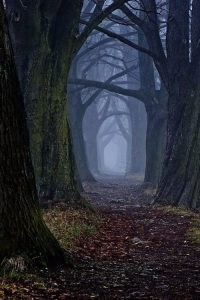 young then and the things that I asked for, in retrospect, seemed foolish. Still, it served me in some ways.

When I was 23, I made another pact – this time, my pact was a re-structuring of my personal beliefs and a renewal of my path in Satanism. With my second pact, I had a better idea of who I was as a person and what I wanted out of my relationship with Satan.

My third pact came after my husband passed, in 2012, in another renewal of myself and my path in Satanism. I never felt that renewing my pact was a negative thing – in fact, it felt like it was the right thing to do and it suited me at the time.

I also studied Wicca for about a year when I was 16, and never felt that I was betraying Satan. I wanted to learn as much as I could about the Occult in general. I have enjoyed working with Greek and Roman gods, who seemed accommodating to those that also had allegiance to other gods like Satan.

And, in 2009, I studied and practiced rituals from the Golden Dawn, which was an enlightening experience. Through it all, I always knew that my heart belonged to Satan. All those other studies just enriched who I was and helped me to evolve into the person that I am today.

A pact with Satan isn’t a final destination. Instead, it’s part of your journey as a Satanist. Consider how far you have come and what lies ahead. You are always free to come back with new understanding and perhaps, a better perspective on what you want out of your pact. This is especially true if like many Satanists, you made your decision when you were younger and not so wise. It’s ok to move on and find a new road if you feel it would make you more complete. The door is always there to return to when you are ready to walk the dark path again.

For tips on staying on the Satanic Path visit: Reader Q&A Are There Daily Practices in Satanism? And also more discussion on pact making can be found at: 3 Mistakes New Satanists Make

Have you ever considered breaking or re-negotiating a pact with Satan? Let’s discuss!