Some Advice From The Experienced On How To Summon A Demon.

So you want to summon a demon.. I have been asked over the years how to summon a demon. Many times, the question comes from inexperienced people who want to dabble in the dark arts. They want a quick solution to a problem, and they think that summoning a demon is an easy solution to their woes. But, what most don’t realize is that demons aren’t your personal problem solvers, and that they aren’t eager to help you solve mundane problems.

Many times I will suggest that magic is an easier and quicker solution to a problem, rather than summoning a demon. This is because magic is problem-oriented. It’s main use is to help you in life with situations that can be manipulated. Along the way magic helps you to find your purpose and it enriches your life.

But it seems that many people in today’s age are too impatient to learn a magical craft. Many think the occult is a quick and easy way to do things, but in reality it’s not. The study and practice of magic is a lifelong journey, not a quick fix. If you aren’t learning and building your own spells along the way then you are just replicating another person’s work. You won’t have the opportunity to integrate it into your own spiritual being, allowing the process of magic to change you along the way.

And finally, many people just don’t know how to summon a demon. It’s a complicated process that takes time and effort. Without the proper knowledge and preparation it may not work for you at all.

Understanding The Nature of Demons

To understand the nature of demons and demonic power, you have to be able to see how they really don’t care about humanity. They exist because we created them centuries ago, at first, to label and identify violent and destructive forces in our world. Our belief in them gave them their existence in this world. There are legends of demons controlling the forces of wind, fire and destruction. Their very nature is to degrade, break down, and destroy. But in some circumstances, like the ‘genius spirit’ or daemon, like the demons from the Goetia, they can be used for beneficial purposes.

Demons are vessels of incredible force, but they are an impersonal force. They won’t give you the same comfort and care that you could get from working with more beneficent gods and goddesses. Working with them requires you to relinquish a part of yourself so that they can manifest in this world, through your invocations, callings and actions.

My Path To My First Summoning

When you start out thinking you can just start at the top and that will solve all your problems, what you are missing is a good foundation. Without a foundation in metaphysics you are walking blind into a world that you can not control. Your fear and inexperience will always get the better of you, I guarantee it. It’s much like using a sledgehammer on a problem instead of using a knife to carefully cut away only what you need.

When I first started out thinking that I wanted to summon a demon, I felt that it was the pinnacle of what I could achieve in magic and witchcraft. But, I soon realized how much I didn’t know about magic and the occult in general. Sure, I had done spells and had seen results, but was that really enough to be able to work with the powerful force of a demon?

I was single at the time, young and living alone. I had just broken away from a bad relationship of 7 years and I was

able to live the way that I wanted. I was able to practice my Satanic ritual and live a magical life again.

So I started out in a study of elemental magic. I spent time working within each element – air, fire, earth, and water. I also began to study Tarot and work with crystals so that I could increase my intuitive ability.

It was only through this study that I was able to really be able to walk in the world of demons, with my senses fully open. I worked with these things for over a year before I attempted my first summoning.

When I finally felt that I was ready, there was a sense inside of me that I just could not deny. My magical ability had advanced greatly in the past year and I was yearning to move on to the next step. This next step I felt, was using direct magic. Direct magic is the ability to use magic without ritual tools as a focal point.

My first summoning was intense – I called upon the spirit of Foras (Forcas) to help me to learn direct magic. I didn’t know how to summon a demon but I was willing to give it a try.

What happened after I summoned Foras was nothing short of a miracle.

I spent the entire week studying this demon, finding out as much as I could about him. According to the books, Foras 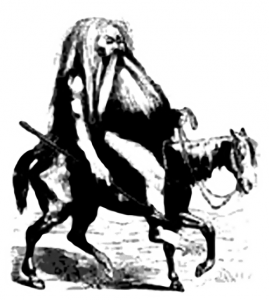 “..appears as a strong man or as a chevalier, with a long beard and white hair. He teaches logic, ethics, and the virtues of herbs and precious stones. He makes people invisible, discovers hidden treasures and lost objects, and imparts wit, wisdom, eloquence, and longevity.” Foras seemed like a good fit for what I wanted to achieve.

I waited until the night of a full moon, I carved a candle with his sigil. I reached out to Foras in a personal ritual. Then I closed the circle, and waited for results. Little did I know that I had opened a door to something fantastic.

A week later, I met someone very special at work. Something drew me to him, he was magnetic. He had the ability to walk into a room and command that room without even appearing to do so. There was just something about this person that I had to discover. When I finally had a chance to talk to him alone, I saw why he had such power and presence. He was a magic user, like me. Our first conversation was about the crystal that I was wearing.

This same man is the man that I eventually married. His name was Bill, and while he was alive he taught me so much about living the magical life. He taught me how to use the subconscious mind. He was an expert at direct magic – the ability to use magic without tools and rituals. In fact, he didn’t like to admit it because of his humble nature, but I always considered him to be a wizard.

Foras had brought into my life someone that I would love and cherish who would eventually pass on his magic wisdom to me, as an apprentice. This divine fate seemed fantastic and unreal. It was a door that opened to a world

filled with magic every day, something that I could share with someone else who had also walked the path for over 30 years. His wisdom that he passed on to me will remain with me forever.

Even from the description in the Goetia, everything seemed to fall into place. Bill was a strong man, as a Tarus he had broad shoulders and he worked hard at his full time job as a marine mechanic. What also seemed interesting to me is that Bill also had a long beard and white hair.. just like the description of Foras!

I feel blessed that Foras allowed me to open a door in my life, that would eventually lead me to where I am today. I also feel blessed to have known and loved Bill. My husband Bill passed away in 2012 from cancer. We had been together for 12 years and I feel like our time was too short. But in a way, his wit, wisdom and knowledge lives on within me as well.

Summoning brought all of that into my life, and so much more. That is because I approached summoning not as a solution to a problem, but as a way to increase my knowledge. I wanted to learn how to use direct magic – and a person was ‘sent’ to me that taught me how to use it! Every time I have worked with summoning my goal has been to increase my knowledge. Because, to me, knowledge and wisdom is a key that is worth more to me than anything else in the world.

My Suggestion To Those That Want To Summon A Demon

My number one piece of advice to those that want to summon a demon is to keep it simple. Magic can bring you money. It can find you a lover or keep a lover. It can help you land that new job. It can charm and seduce people. It can benefit your life or destroy someone else. Magic can do a lot for you that you won’t be able to achieve with the complicated summoning of a demon.

So if you think that summoning is going to solve all your mundane problems – it’s not. Summoning is only really useful for those that want to develop a relationship with a demon for worship. And in the short term, they are useful for opening doors that seem impossible to budge with the use of magic.

My suggestion to the inexperienced out there is to forget about summoning until you develop your magical senses. Spend time using magic, and learning a form of divination. It is only though this awakening process that you will be prepared to deal with the effects of demon working. It is only through being awakened that you will be able to see the signs of your results, and how to react to them.

To summon a demon is to call it into your being and into your life. Summoning has a higher purpose. By working with demons, you increase your knowledge and awareness of yourself and the world around you.

Without this you are blind. And that’s no way to solve a problem.

Below are three articles from my Spiritual Satanist Blog that may help you on your journey to summon a demon.

The Circle of the Art [Summoning]