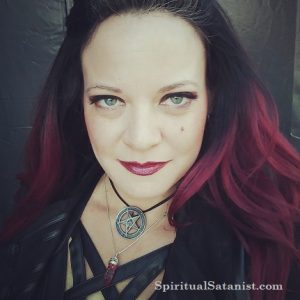 Welcome to my about me page where I get to tell you about my Spiritual Satanist Blog.

My name is Venus Satanas, I discovered Satanism back in 1992 when I was at my local library. I had always had an interest in all things magical and mysterious. So, when I first discovered Satanism, I found something that really made sense to me. Satanism was something that I could personally relate to; it was how I saw the world, and now there was a name for it – Satanism!

At the library that day I had found the book, The Church of Satan, detailing the history of the Church and what Satanism stood for, at least from a LaVeyan perspective. I didn’t actually get to read the Satanic Bible until some time later, in ’95 but by then I had already developed my own way of working with Satan and Satanism. In the early 90’s the internet was a new thing and there wasn’t many resources for those looking for Satanism so we had to find it through other means.

I’ve always been a spiritual kind of person so working with Spiritual Satanism has allowed me to be who I want to be without the strings that come attached with religious Satanism. I have always been independent as well, choosing to not join any organizations or groups.

I started writing about Satanism in 2004 at my Spiritual Satanist site, helping others to discover the awesome path of Satanism. In 2009, I started writing for the Spiritual Satanist Blog to supplement my website. This blog is a social commentary on Satanism in general, with my own thoughts on the movement as I have experienced it throughout the years.

I also started up a youtube channel in 2007, after noticing the popularity of the medium. Back then there were virtually no Satanists making videos. And, in 2009, I was published in Women’s Voices in Magic by Immanion Press. I have also done numerous interviews throughout the years, and my writings have also had academic mention.

You can also read my thank you letter to my fans at my Spiritual Satanist website, a letter that I wrote in October 2017, after writing for Satanism for 13 years.