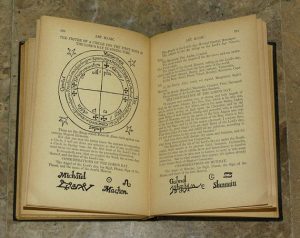 This was a letter from my YouTube page, a question about what direction to take with occult study.  There are many books out there so it can be difficult to know where to start and what to read.

I know this because I have studied the occult since the early ’90’s and I didn’t have anyone to show me which books were good for what I wanted to study –  I had to learn along the way.

So here now are my views and opinions on which books would be good to start an occult library, and along with this I am posting links to these books at amazon.com so you can visit and read the reviews about these books as well.

Mike asks:
“I’m an occultist, beginner And I would like to know, what books should I start with, a library of satanism, golden dawn, thelema, rosicruciansim, kabbalah, qlippoth, and witchcraft. Out of all those religions and sects, what books do you recommend. I know it will be a long list. But I think you are very knowledgeable. Please get back to me..”

Ave Satanas
In the light of the adversary,
Mike

Mike, the occult has a long history and there are many different paths or methods when it comes to occult practice. Occultism can be defined as a method which includes the study and practice of magic, divination, religion, spirituality, or metaphysics, for a mundane or spiritual goal.

So in order to have a good library, which takes years to develop, you should know what subjects you like and what authors you prefer or are considered to be the best, depending on your specific focus or study. In this post, I will discuss the general books that I feel are the best for a beginner.

For your Satanism Library:

A Satanism library should include the The Satanic Bible and the companion book, The Satanic Rituals at the very least. Written by Anton LaVey, the creator of the Church of Satan, they provide a good starting point.

Even if you are not interested in Satanism from the point of view of the Church of Satan, a study of these two books will help you to get a good perspective on what Satanism is about. Don’t forget, Satanism as we know it today is relatively new as a social phenomenon, which began in the late 60’s but new books on Satanism are being published every day.

You could also refer to the books about the Uncle Setnakt’s Essential Guide to the Left Hand Path, written by Don Webb, who has been behind the Temple of Set since the 1970’s. I hear his books on the inner teachings of the Temple are very enlightening and educating giving you an inner view of what it’s like to practice magic and ritual as a Satanist. 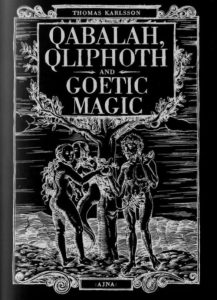 Writings on the qliphoth were best expressed by authors like Kenneth Grant, who wrote the Nightside of Eden trilogy, based on the teachings of the Typhonian OTO [Crowley].

His book, Nightside of Eden, details a path of qliphotic path working, gathered from sources such as Crowley’s 777 and Liber 231.

There was also a useful book focused on the tunnels of the qliphoth, written by Thomas Karlsson, titled Qabalah, Qliphoth and Goetic Magic. This is a magical and ritual pathworking book that serves as an introduction and excellent companion to Kenneth Grant’s Nightside of Eden.

Before you attempt to work with the Qlippoth, however, you should take some time to explore the concepts behind the Golden Dawn and Ceremonial Magic.

A study of the Golden Dawn would be excellent if you are interested in Ceremonial Magic. The most famous and well-written book on this subject is The Complete Golden Dawn System of Magic, written by Israel Regardie and Lon Milo Duquette, both respected authors, who describe the basic elements of the Golden Dawn teachings along with descriptions of the rituals, and the Grade work. The Golden Dawn is an initiatory system of magic from which many other occult traditions were based upon.

Many of the Golden Dawn teachings require the assistance of other participants. For those who want to study and practice on their own, another excellent book on the subject is Self-Initiation Into the Golden Dawn Tradition by Tab and Chic Cicero.

The Golden Dawn teaches several different areas of magic including ceremonial magic, geomancy, kabbalism and gematria, magical correspondences, and things of that nature.

Books on Kabalah (or Quabalah!)

And, a book on Kabalah should compliment these studies. One of the best authors on this subject is Lon Milo Duquette who wrote: The Chicken Qabalah of Rabbi Lamed Ben Clifford (Dilettante’s Guide to What You Do and Do Not Need to Know to Become a Qabalist).

Lon Milo Duqutte has an interesting angle when presenting the ideas of the qabalah and while his methods are considered to be unconventional, he is a very notable author and his methods are easy to understand and make a great introduction for further studies into qabalism. 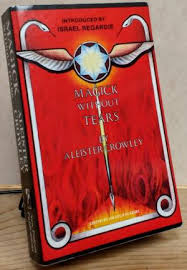 There are several books written by Aleister Crowley worth looking into, most notably Magick: Liber Aba : Book 4 which details the ideas and philosophy behind Crowley’s personal method of Thelema, magic and ritual.

Another book that would compliment this study is the Liber Al Vel Legis: The Book of the Law, to help you understand and meditate on the theories behind Crowley’s system of magic. Along with this,  Magick Without Tears, can give you some insight and a general guide to the occult through Crowley’s eyes. This guide was written by Crowley in his later years as a magician and mystic.

Of course, I would not recommend Crowley to a beginning student because it is a specialized area which requires some knowledge in occult studies before any of it can be really understood, and even then some of his methods and teachings can never be understood by anyone but the one who created them, because Croweley wrote in riddles in most of his books, using his own poetic language.

Along with these books you should eventually aquire 777 And Other Qabalistic Writings, and [the companion book to this] The Complete Magician’s Tables, written by Stephen Skinner, both of which will help you to navigate through the teachings of the Golden dawn, and Aleister Crowley. 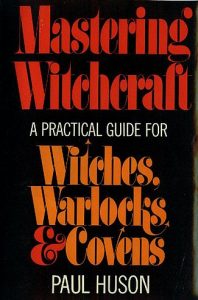 Witchcraft books; there are several which you may like that can help you to explore the world of magic. The first that I would recommend is Nocturnal Witchcraft: Magick After Dark, written by Konstantinos.  I have found that he has collected some good theories and ideas into his book, describing methods of dark witchcraft based on many different sources, giving an eclectic view on dark magic. It’s certainly recommended for beginners for his down to earth style of writing.

Some good reference books for witchcraft Candle Burning Magic: A Spellbook of Rituals for Good and Evil by Anna Riva, which has basic methods and techniques of candle magic, a useful book if candle spells appeal to your style.

Another basic beginners book that discussed theory and technique on witchcraft is Mastering Witchcraft by Paul Huson, which outlines his basic ideas on what witchcraft is and why witches do what they do, a very comprehensive guide. Your library of occult and magic would not be complete without it!

Try to seek out authors that are well known and respected. Some authors with a better reputation in the occult use past knowledge and references from other authors to create a new method or way of thinking while providing references, indexes and bibliographies for their books, which come in handy while you are studying.

The types of subjects you asked about seem to be geared towards ceremonial and ritual magic..So, I hope these references help you to start your own occult library, something which takes years to build through time and the desire to learn new knowledge.