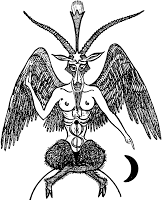 For this meditation all you will need is the image of the Levi Baphomet, the best example is found in the Eliphas Levi book: Transcendental Magic.

Levi was a former Catholic, who most likely developed the image from the devil imagery of his time – from the tarot trumps that showed the ‘devil’ as a winged, chained half man, half beast. He also claimed that it was the idol of the Templars, but this information comes from torturous confessions during their assassination, and was likely never true. The Templars were Christian money lenders, and between their friendly relations with the Islamic armies, and their practice of money-lending, they became targets of persecution and public humiliation. The story of idol goat-worship came after their death, to slander their name.

Some claim that the word Baphomet means ‘mahomet’, but the image itself does not have any Muslim attributes, and also, the Muslims have never been able to create images of their god. it is more likely that the association with Mohamed and Baphomet came about from the templar’s relations with the Muslims. The name is also speculated to have come from ‘abufihamet’, a Sufi word meaning ‘father of wisdom’.

Others have said that the name of Baphomet, relates to the Latin meaning of ‘baphe metis’ absorption of knowledge, and even earlier from egypt – Ba of Mendes, a goat-like fertility god that throughout time has likely been the inspiration of the images of Baphomet.

Levi never intended for the Baphomet to represent Satanic forces as Satanists have represented it today. Regardless, Satanists the world over have adopted the Levi Baphomet as a symbol or image of Satan. This image beautifully illustrates the essence of Satan, and the earth, and focusing on it makes for a great meditative practice.

Look into the image of the Baphomet. It is a creature that is half animal and half human. The head is of an animal, the goat. The body is both male and female and illustrates their sexuality in union through the symbols of the intertwined snake. Through this union life is created and sustained.

The Baphomet is androgynous and represents both forces, just as Satan represents our animal and human natures. Look into the Baphomet’s eyes. The Baphomet [as Satan] asks us to look inside to find our own wisdom and reasoning. Through this he/she is able to find the balance between the earth and the underworld, outside and within.

The Baphomet holds hir hands in the pose of benediction, to show that through this self enlightened wisdom, all things are possible. Upon the arms, reads the words ‘solve et coagula’, roughly translated it means to ‘gather and dissolve’, two great forces of movement that are universal and never ending.

The Baphomet points to the two moons, showing how the darker forces of nature are in alignment with the lunar current. Meditate on the image of the Baphomet to calm and center yourself and to focus on the element of Earth as it relates to Satan. As you look the image over, think about what each aspect of the image could represent to you.

Baphometic Invocation: I call upon Baphomet! Father of Wisdom, Mother of Truth and Lie, Bringer of Day and Night! Gather and dissolve your Silent wisdom among us! As we look inside we will know, As within so Without, As above, So below!

Also read my entry on my Recent Altar and Baphomet Statue