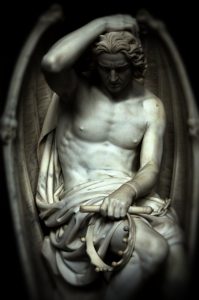 As we draw nearer to the Christian holiday of Easter once again, as Satanists we are reminded why Christians celebrate Easter. It’s one of their most important holidays besides Christmas.

But, what does the holiday really mean? This holiday can have a spiritual significance for you as a Satanist as well, once you understand it’s general meaning. The tale of Christian Easter is focused on the death and resurrection of a god. This tale is not unique to Christians, as you will see.

There are many stories from around the world about the dying and reborn god. for instance, in one of the more popular tales, we can go back to ancient Egypt and their belief in Osiris, who died and rose from the dead. In the story, the king Osiris was tricked by his brother, Seth to lie down in a lead box which was thrown into a river. In mourning his wife, Isis, searched for him until his resting place was finally found. The gods rewarded Isis for her faithfulness and they resurrected Osiris. The festival for this was usually around April 3rd, where after a three-day celebration the final ceremony was conducted, in which Osiris was found and resurrected. It is theorized that this ritual was linked with their fertility and harvest cycle.(1)

Many of these myths have a common theme and purpose and are based on agricultural and natural happenings between winter and spring. Grains were harvested in fall and they bloom again in the spring, and the folks of the time related that to the symbolism of the action of the god dying and being resurrected. Many of these stories have several versions as well, so there is a variety of mythos much like what the Christians have.

Could us as Satanists have our own legend too? I think the closest thing is the fall and rise of Lucifer, as told in their Bible. But even before Lucifer was demonized by Christians and it was written in their Bible, the Lucifer of Roman times, as the son of the goddess of the dawn, was hailed in a similar fashion, as a god that rises in the east and falls in the west.

The eastern star can be a focal point for you on early Easter morning, if you wish, doing a ritual to honor Lucifer as a fallen and risen god. Lucifer as a living god is a force that many of us relate to as Satanists but on his own, as a liberator from the darkness of ignorance. Just as Lucifer liberates us from the night, his star heralds the dawn letting us know that morning, and a new day has arrived.

This is a quick, basic ritual that you can do for Lucifer. In my teachings, I relate Lucifer to the powers of the Air, The planet Venus, and the dual sign of Libra, being both morning and evening star. For this ritual, the color is Blue, and the herb/oil to use is lavender. These are only suggestions for you to use, of course, based on common associations of elemental and planetary magic.

Outdoors, early in the morning while the eastern star is still visible, burn some fresh dried lavender or light lavender incense. Light a blue candle that has been mindfully anointed with Lavender oil; Hand draw the sigil of Lucifer on a piece of paper or parchment. Face the eastern star and say this as you light your candle.

Help me escape the ignorance of the night,

Show me the way through your divine power!

On this Easter morning at this early hour!

You can also supplement this evocation with any saying that you wish instead of the one that I have provided. If you like, burn your sigil after your evocation, the smoke from it will rise towards the stars. Alternatively, keep it on your personal altar as a memento of this moment in time.

Spend some time meditating on the symbolism of Lucifer and the beneficial things Lucifer can bring your life. I like to think that Lucifer brings us wisdom and clarity, just like the symbolic scales of Libra allow for a person to carefully consider an issue and make an educated decision. Lucifer brings balance, being at the midpoint between night and day. Lucifer’s appearance before dawn is symbolic of the idea that comes first that that leads to full realization. Allow Lucifer to enter your heart and renew it. Lucifer is the knowledge and wisdom of the spirit. Allow the spirit of Lucifer to raise your consciousness. Hopefully through this symbolism, as a Satanist, you can celebrate Easter by giving notice to Lucifer.

Lucifer as a Christian Problem:

What you may find interesting is that even Christians have a problem with their version of Lucifer. As the morning star, Lucifer is mentioned outside of his Isaiah verse (fallen son of the morning..) stating: – “I, Jesus, have sent my angel to give you this testimony for the churches. I am the Root and the Offspring of David, and the bright ‘Morning Star.'” Rev 22:16.

Most English translations title the “Lucifer” in the Revelation verse as “Morning Star” while they leave the original Isaiah verse as “Lucifer”! While this verse is found in the basic king James version of their own bible you will find that many Christians deny the association between their Jesus and Lucifer, even though it is in plain sight as bright as the star of the morning.

For more information on Proposed Satanic Holidays visit SpiritualSatanist.com – In my discussion there I speak about also doing a ritual for Lucifer during the Spring Equinox.