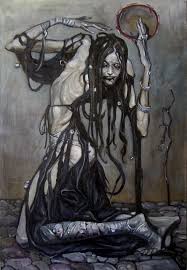 Now I’m neither an atheist nor a theist; truth is, I do believe in a supernatural power, one that most people call God. I’m not so sure however that I believe in the antithesis of God, or in other words, his evil counterpart Satan. Although I have heard that people do get involved in Satanist rites and negative prayers (to wish harm on their enemies or even family members), I have never given the idea more than a passing thought. So I was intrigued when a friend of mine suggested that my recent string of troubles and problems could be associated with voodoo magic and the occult.

I’ve seen my share of movies that featured voodoo dolls and evil sorcerers who stick pins into them in order to torture their enemies, so I was skeptical at first. But then, desperation drove me to investigate the idea further. I looked back to each incident that had gone wrong in my life and wondered about people who hated me so much that they would go to such extreme lengths in order to make me suffer. My friend took me to a shaman who conducted a séance and assured me that it was a relative who was the cause of all my trouble.

Although I did not openly show my incredulity, that was the last I allowed my friend to talk about this issue. I happen to believe that good triumphs over evil, and that if we are true to our conscience and lead a life filled with values, no evil force on earth can harm us. And that’s just what I decided to do about this voodoo mumbo jumbo – ignore it and hope that my troubles would go away with the passage of time as they usually do.

So do voodoo magic and other Satanist rituals really work? I’m sure most people have asked themselves and others this question more than once. Even the most diehard optimists and staunch religious believers know in their hearts that a tiny corner of their minds swings between believing and not believing the occult and its associated rituals. They may occasionally wonder if there is some truth behind all the stories that they hear, even though some of them are quite bizarre.

Perhaps we condition our minds to believe that they do work; or we think that they work through backward association – if such and such thing happened at such and such time, then your mind tries to figure out where so and so person was and what they were doing at the time. A small seed of suspicion is enough to develop into a full grown tree within a matter of minutes when it comes to believing what the mind wants to believe.

Voodoo, black magic, Satanism and talismans are all just beliefs in our minds, just like religion is. We believe what we want to, and whether it is good or bad is a choice we have to make.

This guest article was written by Adrienne Carlson, who regularly writes on the topic of online christian colleges . Adrienne welcomes your comments and questions at her email address: adrienne.carlson83@yahoo.com.