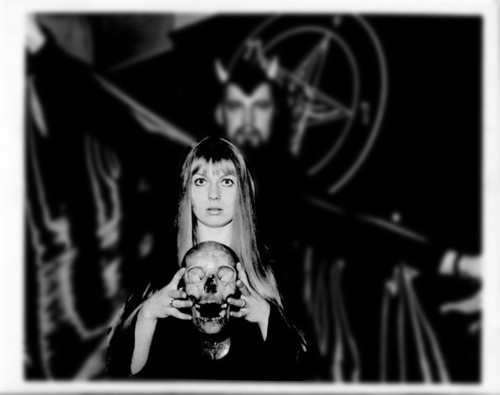 I am a Satanist. I also happen to be a woman. Women in Satanism are outnumbered greatly as Satanism is generally, more attractive to males than it is females. There is still a place for us in Satanism though, and throughout the years some very important women have carved out their own niche and helped to create Satanism what it is today.

Today’s post highlights one of the most influential women in Satanism.  Her name is Diane Hegarty but you may know her as Diane LaVey, who was married to Anton LaVey, the founder of modern Satanism. Without her work in Satanism we would not have all the great things we have today.

Diane helped to found the Church of Satan alongside Anton back in the late 60’s. She helped to write and edit many of his books including the Satanic Bible, The Satanic Rituals, The Satanic Witch, and the Devil’s Notebook. These influential books have helped many Satanists throughout the years to discover and work with Satanism in a variety of ways.

Working behind the scenes, she dealt with the press and the media, arranging interviews and administering the duties of the Church. During the Satanic Panic era, Diane stood up for the Church of Satan when the media had questions about Satanism and their role in the allegations and accusations of ritual kidnapping and murders.

She served as high priestess for 25 years, helping the Church of Satan in any way that she could. It is my belief, that without her, the Church of Satan would never have become what it is today, and Anton LaVey would not have had the kind of influence that he had in society. Even still, she let him have the spotlight while she took care of all the essential things that made the Church of Satan what it was.

Diane also spent time taking care of her children, both of which ended up having successful careers in Satanism. Her daughter, Zeena, was the first child to be baptized in a public ritual at the age of three. Later on, Zeena overtook the duties of High Priestess of the Church of Satan, from 1985 to 1990. Zeena also appeared on daytime talk television during the height of the Satanic Panic, defending the Church from the false, politically motivated Christian conspiracies that were the focus of the nation at the time.

Without all the work that Diane LaVey did behind the scenes, Satanism wouldn’t be what it is today. From administering the duties of the church, dealing with public relations, and also helping to write and edit the Satanic Bible, we have a lot to be thankful for in this wonderful woman of Satanism. Today is International Women’s Day so take a moment to appreciate the women in your lives that have helped to make it happen!