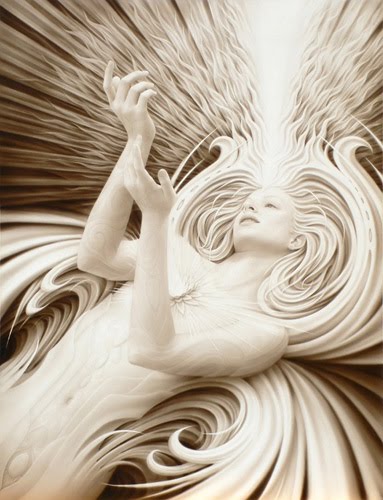 Thoughts on Satanic Love…
In Satanism, I have found that some Satanists treat the word ‘Love” as if it were a four-letter word. They say the word with contempt, with disgust. They treat it as if it were not part of the Satanist’s vocabulary. Almost as if it were something to be hated. As if it was a word not to be spoken.

Is it because some Satanists hold on to their past beliefs of Christianity, and in their struggle to let go of it, they treat all the concepts of Christianity with contempt? Words and concepts like ‘compassion’, ‘forgiveness’, and ‘love’ are seen as a condition of weakness and ignorance.

Perhaps LaVey had something to do with this contempt for love. Wasn’t it LaVey who suggested that forgiveness was only to be given in a conditional way, to those who deserved it? Didn’t he suggest that hatred for the hypocrisy of Christianity was righteous for Satanists? Do some Satanists, even though they are not LaVeyan, accept beliefs that LaVey introduced into Satanism through his own (hypocritical) philosophy?

Love is not a Christian concept. It is not owned by Christians. No religion has enough righteousness to own that word. That is because love is a human emotion, not a tool of the religious. Indeed, it has been used in that way – to change people’s attitudes about each other and about life, through a spiritual perspective. But in the end, love is a human condition, and there is nothing more Human than the Satanist who is closest to the realities of life. Isn’t that the ‘Satanic Ideal’?

The Broken Past Lives On..
Treating the word ‘love’ with contempt is a social problem in Satanism. Some of us aren’t prepared to live a life outside of Christianity, or to leave that zone of inverse-christian beliefs. So it is only natural for them to only see that word from a certain perspective. To them, it becomes a tool of the weak and the lowly, the end-product of manipulation and mind games.

It is a social problem because the word is treated with prejudice. If Satanists seek freedom and the ability to live life as they see fit, then why is love avoided or shunned? Wouldn’t it make more sense to explore -why- love is important and how it can be used outside of a Christian perspective? I certainly think so. It’s important to me.

I wrote this post today because I had asked a question on Facebook, and this question was about how Satanism has changed lives in a positive way. One person replied that he appreciated and enjoyed the love of Satan, and his comment erupted a firestorm of replies that ‘love’ didn’t exist in Satanism.

I disagree with the idea that love does not exist in Satanism, because in a world filled with possibilities and a life that is truly free, there is room for love. A true kind of love that is not false or contrived, a love that is outside of moral ideals that belong to the religious. If Satanists are willing to deny that love is worthless or has no use in Satanism, then what kind of life would that be?

If Satanists refuse to change the ideas of the past that only serve to hold them back from enjoying life, then what kind of future will they have as Satanists? Aren’t they just repeating the same mistakes of the past without creating a change that will improve their future? Satanists could be denying the opportunity to enjoy life and give up the worthless ideas and attitudes that don’t work.

A Love for Satan
Many of us got into Satanism because we had a desire to experience Satan and Satanism in whatever form that it appeared to us.. and many of us do have a love for Satan who, (for some) has guided us along our path every day since we first began our journey.

I admit that I also love Satan, and this love is a deep spiritual love that comes from the heart. Satan has always been there for me, but I have always had the freedom to choose how I will live my life. A love for Satan is not a requirement to be a Satanist, but this love for Satan, and love from Satan has been experienced by many of us in a spiritual way. This love only came through time and experience.

Where Do you Stand?
What about Self-Love? This is not the same as being selfish – I think that Self-Love is the ability to be honest and true with ourselves, to take responsibility for our actions and to have a genuine interest in making one’s life better each day. Selfish love destroys, but real and true spiritual Self-Love builds something so great that nothing can destroy it. Real and true love, from the heart, from the Will.

Maybe some Satanists lack that certain kind of confidence, and they do not love themselves. As long as they cling to the shards of their broken Christian past, and they proclaim that love is a four- letter-word, they may never get to experience one of the greatest joys in life that makes life complete.

The destructive nature of Satanism leaves many in the dark when it comes to love and the expression of emotions in a healthy and balanced way – and I can understand this. Satanism is not an easy path to be on. I think that it is one of the most difficult paths there is. It can build you up but it can also tear you down. When it all comes down to it where do you stand?

I do not think that Love is a Four-Letter word.

Satan Be With You,
Venus Satanas