A friend at my Facebook asked me about my drawing of Michael. This was a drawing created in 2006.

I created this drawing during a summoning of Belial. Back in ’06 I was experimenting with Goetic Summoning, and Belial was one of the more influential spirits that I worked with.

Summoning Belial was an experiment in general. At the time, I was still working on my style of summoning. In summoning him, I created a ritual in which I wanted to evoke Belial through the element of fire. I felt that evoking Belial through that element was the best way to connect with his spirit and his essence.

So, I created a ritual where I evoked the element of fire, and then afterward I evoked the spirit of Belial. What was so interesting is that my cat Shadow joined in with me during the summoning. maybe he was curious as to what I was doing, or maybe not.. but I created a circle of astral fire around me, and then he sat outside of the circle and watched as I called out to Belial. I listened to certain songs during that week that would enable me to enter into the state of mind that I find necessary for interacting with demons. I think it was the Covenant album of Morbid Angel.

During that week, I had several inner visions that caught my interest. As I chanted his name and focused on his essence, one particular image that came to my mind was striking. it was the image of a skull in the darkness, surrounded by old bones.. this image was strange and frightening to me, and at the same time I was angry for this, so I called out to Belial again, and I said to him, ‘Show me a more pleasing form!’ almost immediately the image faded into the sight of a majestic lion. To me the meditation experience was incredible.

But, most of my experience in evoking Belial did not come from the inner visions. it was how this spirit interacted with me that made me feel that he had imparted his influence in my life. This influence came through knowledge and through interactions with others in my life. It is hard to describe but when I was evoking the Goetia they would bring to me certain situations as a test, or they would ‘produce’ fortunate situations, or allow things to come through for me. When I worked with them my main goal wasn’t fulfillment of desires, it was the search for knowledge, and that is how much of it was experienced, through visions and inner knowing and through the experiences around me.

I studied the name of Belial – and there were many variations of his name. One of the more interesting variations was the word, ‘be-liar’ and the more that I focused on this aspect of his spirit the more that I doubted some of the knowledge that was presented to me. I didn’t doubt that the knowledge was true or false, I just doubted whether the knowledge would be useful to me if I wasn’t going to dedicate and worship Belial as a demon. It seemed that he was only willing to impart so much to me without some type of dedication. At that point, I felt lost and unsure.
In my research I discovered that there was some other source that I could turn to, to help me to interrogate the spirit of Belial. This spirit was Michael.

So, for several days I focused on Michael. the first vision of him that I had was the vision of a white horse. then I began to see two figures who were separated from each other, facing away from each other. Then I saw Michael at a gateway. These were symbolic and meaningful inner visions t 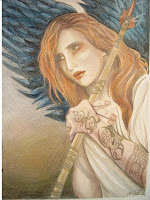 hat I experienced in my mind during meditations. I asked Michael several times to help me, to reveal if the spirit of Belial was really ‘be-liar’..

After some time I realized that Michael was not going to help me if I wasn’t willing to dedicate my life to his god. He wouldn’t reveal secrets to me without being one with my spirit.

During that time, I created the image of Michael to help me to focus on his evocation. I envisioned him as the keeper of secrets, guarding what could be known behind the veils of existence. I think the pose and the coloring of the drawing captured the essence of my experience with him.

In fact, drawing helps me to ease into a state of mind that is very receptive to creative thought. Music has a similar effect on me. But, it is how I used these states of mind that enabled me to experience the essence of these spirits. I found no kindness within my experience of Michael, and I was not willing to worship Bel’yal to obtain deeper secrets and mysteries. For some time after, I kept the two drawings together by my altar.

My experiences were incredible and fulfilling and I wouldn’t hesitate to work with Belial again if the opportunity presented itself.