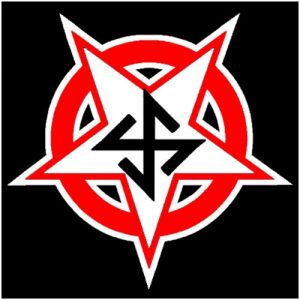 After reading the essay by Diane Vera titled “How can we effectively discourage neo-Nazism in the Satanist scene?” I wanted to respond to her essay in agreement and give my own views on neo-Nazism in Satanism. Please read her essay first, and then come back here for my commentary…

In this essay Diane gets to the issue of freedom of thought vs. discouragement of Neo-Nazism. I am in agreement with her statement that others have the rights to whatever they want to believe. but, when these beliefs become a public menace, and when religious beliefs are used for a political agenda, it makes me question why they should have rights to hurt others under freedom of speech with what they say and do.

Vera also makes the point that Satanists should care about Nazism in Satanism for several very important reasons. First of all, neo-Nazism and Satanism are not really compatible. The beliefs of ‘traditional’ neo-Nazis are by majority christian, while some identify with paganism or Asatru. Satanism is not generally associated with Christian worship, or paganism [although some Satanists do have a pagan pantheon].

There will always be those that claim that these beliefs all belong together, Nazism, occult and Satanism. typically, this beliefs is from a fundamentalist Christian point of view. So when Satanists agree that Nazism belongs together with Satanism they are essentially agreeing with the ‘religious right’, that all things that could be questionable are in fact, evil, and therefore ‘Satanic’.

The solitary beliefs and practices of Satanists are in contrast with the political agenda of neo-Nazism. According to Vera, “The most extreme neo-Nazis want to kill whole large sectors of the population, including both Jews and gays, and they want to force vast numbers of other people to relocate.” The things that attract Satanists to neo Nazism are the very things that make Satanists look bad. Segregation of society is a terrible thing, and it is un-American, in my view.

Diane Vera writes..”Admittedly, there have also been some very noisy Satanists who have tried to define Satanism as a political movement calling for changes that would be every bit as drastic. But, as far as I can tell, the vast majority of Satanists don’t see Satanism that way.”

I am in agreement with this statement above. The few Satanists that I have seen that are involved with a political agenda are extremists. They do not care about the advancement of Satanism or of the self. They want to wallow in hatred for humanity, an opposite view to those that see the human body as sacred, and for those who see Satan as god of this entire earth and all that is in it.

The neo-Nazi community with its strict Christian fundamentalist beliefs, are not likely to accept Satanism any time soon. So why some Satanists choose to accept neo-Nazism, is because they are looking for an outlet for what they think will shock, enrage, empower. In my view this is a stereotypical reason for being involved in Satanism. Neo Nazi Satanists choose to use Satanism as a soapbox for the same reactionary political agenda that fueled one of the most horrific tragedies of humanity.

Vera makes a very good point in her statement about neo-Nazism in Satanism causing alienation. Neo-Nazism is by its own nature a method of alienation. Satanism has been around for more than thirty years and it is becoming more socially accepted in different areas of paganism and alternative belief systems.

To accept the hatred-filled beliefs of neo-Nazism into Satanism is to deny our chance of expression – essentially its bad for Satanists who have had a hard enough time dealing with lies, accusations of the Satanic panic, created falsehoods, and now *racism*?

Daine writes that there will be those who will object to this view, stating that Satanists would not care at all about how Satanism is perceived. They are entitled to their opinion, but I don’t agree with it.

I personally think that Satanism should not be used for a political platform for radical and fundamental extremists. I personally oppose neo-Nazism and racism in Satanic practices. I can not identify with their beliefs because I have no need or desire to hate other human beings, based on race or gender.

Satan is a god that encompasses all of humanity, not one ‘chosen’ part of it as satanic neo-Nazis may assume. thirdly, I oppose neo-Nazism in Satanism because I do not think that political beliefs belong in the same arena with spirituality, or religion.

I want people to know that as a Satanist, I am not hate filled – I have an interest in humanity. To me there is only one race, the Human race..I am not afraid to socialize with others who have different beliefs than I do, because I am secure and comfortable with my self, and who I am.

There are organizations and groups ready to point the finger at all neo Nazis and Satanists, claiming that they are one in the same – when they are in fact, radically different.

And there is something that I would like to add. If the vast majority of neo-Nazis are Cchristian, then why are they worshiping the man who was the King of the Jews?

Quotes in this post are taken from the essay “How can we effectively discourage neo-Nazism in the Satanist scene?” by Diane Vera