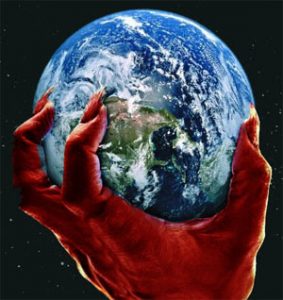 I read a very interesting statement on a website the other day:

“The “Devil” *not* the Judeo/Christian “God” was the creator of humanity.”

Its a very interesting statement because it shows what some Satanists are willing to believe when it comes to religion. They believe the opposite of what the Christian bible teaches, that god created humans and that Satan is the enemy of man.

The story of creation as told in the bible, is similar to many other creation tales that can be found in religions around the world, so why should a creation tale in Satanism be any different?

There are two things you should consider:

First of all, if all of these creationist tales are true, according to the words of their religion, including paganism, Wicca and Christianity, then which one is right?

Secondly, why do people have a need to believe that this earth was created by some divine force? Is it because they want the gods of their religion to be recognized for the creation and ownership of this earth? Does this so-called ‘ownership’ give them some kind of divine power and social authority?

Which one is True?
Lets look at the first question. There are many, many religions that are found all over the world. Each one of them has their own version of how the earth was created. Which one is true? Which religious myth is real? is it the one that is the most convincing or believable? Does the ancientness of a religious idea make it more reliable as a truth?

It does not make any logical sense to believe that they are all right. If any god had created this earth, what created that god? The Greeks and the Romans believed just as much in their own creation tales two-thousand years ago, as Christians and pagans believe in their own stories today.

The idea of creation through divine forces does not make sense to me. I feel that Satan is a *god of this earth* a god that represents earthly things, but I would never claim that he created this earth. The idea is ludicrous to me. What created this earth, nobody can answer. No one was there in the beginning to see it, to witness it. However, science may have some ideas on how planets are created, through their research..but much of this is theory for now.

It is more evident, however, that religions and the creation stories that accompany them, have developed over many centuries, each with their own story to tell. This is an obvious fact that can be proven through historical, archeological, and sociological research.

Ownership or Possession of the Earth
And that brings me to the second question, Ownership of the earth. Religious Satanists, like the members of other religions, want to claim that their god owns this earth. By believing this, they can fit in with he other religions that make this same claim, therefore making themselves seem legitimate.

The most popular creation story of satanism is found in the Al-Jilwah. Through research, it has been proven that this document was created by a person who had little knowledge of the document’s origins and meanings. It was written by a man who like others of his era, had strong religious prejudices against the peoples who first wrote the Al-Jilwah. Regardless of this fact, the story of the Al-Jilwah is accepted as a creation story in Satanism, only because LaVey introduced the story and made it popular to Satanists in the Satanic Rituals.

However, Satanists do not have to accept the same basic ideas that Christians, pagans, and all other religions preach, that their god[s] created the Earth and/or the universe. Satan is a *god of this earth* a god that represents earthly things, one of many gods of this earth that represent human needs and desires on a divine level.

You are not loosing anything by abandoning the religious idea that Satan created the earth. In fact, you are freeing yourself from the same trap that all religions try to teach, and that can be really liberating.

This is also why I gladly accept the fact that all gods were created by humans, as a means of religious and spiritual expression. This idea makes more sense to me than the self righteous, and faith-based ideas of the religious who, for many centuries, have tried to claim ownership of the earth and sometimes the entire universe, through their ideas of what their god represents.

What appeals to me is the recognition of Satan as a god of humans, reflecting our nature and our desires, and moving through the forces of nature itself, by means of Satanic expression.