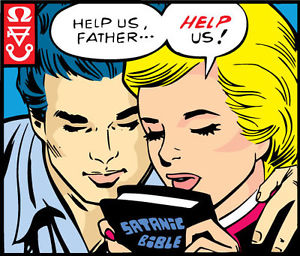 Satan – Not My Father – or my Shepard

This blog post is about the trend in Satanism where some Satanists choose to relate to Satan as a ‘father god’, and how this trend originated from the practice of inverting Christian beliefs.

Some Satanists call Satan by the name of “Father”. This addresses the need for Satanists to relate to Satan as a Father God. I think this practice is most likely to be found amongst spiritual or theistic Satanists.

Why do Satanists need a ‘father god’? Generally, there is no ‘mother god’ in their cosmology, so the idea of a ‘father god’ originating everything in this universe, including ourselves, does not make sense.

The need to have a father god, originates in the roots of many spiritual and theistic Satanists, when they abandoned their Christian path and continued on with Satanism. They inverted certain values, reused certain ideas, and abandoned other ideas as useless. The bottom line is, Satan as a father god is an inversion (and replacement) of the Christian god as a father figure. A (spiritual) foster father.

‘Father Satan’ is also a term that is used within Cult Satanism. In the practice of Cult Satanism, there is a need to unite all who participate under one way of thinking, that way usually being the teachings of the cult or the direction of the cult leader. By creating this kind of father-child relationship, it ensures that there is a solidarity of belief and that all who accept those beliefs are faithful to the idealism of their cult.

The use of ‘father Satan’ perhaps comes from the saying in Christianity, ‘god the father, god the son, god the holy spirit’, and other sayings like it. The Christian god as a father is a way for Christians to relate to their god as the creator and ruler of the universe.

It is the backdrop of their Christian mythologies of Jesus as the son of the Christian god. A general Internet search for ‘god my father’ brought up this quote which seems to reflect the sentiment of a lot of Christians – “The sovereign God of the universe is also my loving Father who watches and cares for me moment by moment.”

A verse like this says to me that the Christians have sought to make their god a spiritual father,
and by doing this their god becomes a source of guidance. This is the same trend that some Satanists use when they pray to Satan as a father god. They want to accept that Satan is the creator and ruler of the universe, and that their god, Satan is also their spiritual father who offers them benevolent protection and guidance.

This is at it’s very foundation, again, an inversion of Christian beliefs.

Since I am examining why Satanists use their former beliefs in a new way in Satanism, it is interesting to me to see how that has been done over time. To me, it seems as if some spiritual and theistic Satanists have replaced the Christian god and inserted a Satanic one.

I am a spiritual Satanist, and I also am theistic. Yet, I was lucky not to have to be raised in a Christian environment. I have never had the need to address Satan as my father in any prayer or ritual that I have done. It goes against the basic ideas that I have about Satanism.

Satan, to me, is life, inspiration, direction and motivation. Satan, to me is not something to be entrapped by. Satan to me, is not commanding or demanding. I have my freedom to be able to be my own person, to live my life in my own way.

Satan, is not always benevolent and loving. I have had to find my own way, make my own mistakes and come to my own conclusions along the way. This allowed me to learn and to develop within Satanism. It benefited me. I do not need a father or a Shepard to live by. And, as a Satanist who is outside of Cult Satanism, I certainly have no use for Christian terminologies that are used in a Satanic way to mold my beliefs according to a cult leader’s desire.

When Satanists are ready to break out of the cycle of inverting Christian values, they may find that there is so much more freedom, and opportunity to be self- expressive in a personal way. When Satanism can evolve beyond the issues that they seek to break free from, then perhaps Satan will no longer become a ‘father’.

Instead Satan will be a force, a source of motivation, a reflection of desire, and a reason to live by one’s own will. That is, after all, the goal of Satanism as a whole – to live according to one’s own desires in the best possible way so that life can be enjoyed to its fullest. Under the leadership of Satan as a father god, a Satanist is participating in an archaic style of understanding, and promoting the idealism of Satanism (still in its infancy) trying to break free from its parentage of Christianity.

My goal in Satanism, after many years of living with it, is my need to be at Satan’s side, as an ally. This precludes the need to be below Satan, as a ‘spiritual child’ or above Satan as a ruler. That is because I empathize with Satan in a spiritual way and I seek to be an ally towards (hir) cause.

I hope that someday, Satanists will realize their own power within, and they will abandon the father-child relationship. They will break free of this self-imposed dominating relation into a new form of willful self expression. And that they will develop into something unique, special, and worthy, with an inner power that does not need any other leadership but the Self behind it.

To do that it takes some desire to change, to leave behind the baggage and problems of their former religion, and to enter into Satanism through a new way of living. Of course, we all have to come to our own personal understanding in Satanism, but if that understanding comes from an unoriginal foundation then it might be worth examining it and deciding if the ways of old are still relevant and useful.