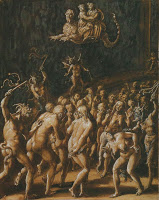 Answers to this will vary depending on who you ask. Not all Satanists have the same beliefs or ideas about where our spirits may go after we die.

The belief in the afterlife is a learned belief, something that is passed down through generations. Every culture around the world has an afterlife belief. the Hebrews believed that after death the soul would go to a place called ‘Sheol’ (the grave). However, they don’t have a belief in hell or eternal punishment.

The Greeks had a place of eternal punishment, called Hades. By comparing the beliefs of the Greek and Christian afterlife, it is easy to see how they are similar. In the renaissance era, some Christians also believed that there were different levels of hell where a person would be punished according to their sin. So beliefs about what the afterlife is, from a Christian perspective, have changed and evolved over the years.

This is a very simplistic view, that was created to keep people in line with the moral teachings of religion. Of course religion will claim to have the keys to life and death and the manual of life to go along with it. What kind of religion would it be without those things? But the simple truth is, death and the afterlife is a mystery and it has been viewed in many different ways by many different cultures.

Who’s idea is right? Are the Hindus right? do we all reincarnate into another life? where does the ‘soul’ go? Does the soul even exist? So many questions. no wonder people are confused about this. Still, people have some kind of general idea that we ALL go to heaven if we are good, or hell if we are bad. If only we were allotted this cosmic justice as a reward or punishment. For example, how could Hitler suffer the same fate as mother Theresa?

Believing in the afterlife is so much more than just a belief. It affects the way people live their lives too. There are two things to consider in this view point: 1. life is not worth living unless there is some reward involved and 2. one must spend their life pleasing whatever god is promising them this glorious existence in the afterlife.

This causes two things. First of all, many people have been influenced by this idea so they loose interest in this life by not caring about the earth, and others around them. What is promised afterwards seems more rewarding than what is offered in the present. It reminds me of a conversation I had in the chatroom, a Christian was talking about 2012, and how he believed the rapture was going to take him away, so he said that he didn’t care if the earth was destroyed and everything died as long as he could be with his god. To me that does not even make sense. This is the only earth we have and we better do what we can to protect it.

Secondly, the promise of an afterlife is a ‘conditional reward’, meaning that a person is taught to believe that if they follow the rules of the religion they will get their divine reward or punishment. This afterlife promise becomes the tool of religion to direct and guide peoples lives for as long as they live. Christianity is not the only religion that has done this.

What Satanists believe will vary according to their path in Satanism. For instance, LaVeyans may accept that there is no afterlife at all, there is no heaven or hell. They may also try to live life and appreciate being in the here and now. It is a very materialistic view. Some Spiritual Satanists may believe that they will spend their afterlife with Satan, even fewer accept that they will go to a Christian hell.

I have a very different view. I have experienced ghosts and spirits. I can not explain their existence but I can say that when you are open to experiencing these kinds of things, they will become more apparent to you that they really do exist. What is also interesting to me is that ghost sightings have been happening all over the world for a very long time. Either it is some kind of mass hallucination or there really is a kind of realm of energy where these beings may exist.

There are theories on why ghosts exist. For instance, it is said that a person who dies in a violent or sudden way could end up haunting an area, either reliving their experience or making appearances. Assuming that ghosts are real, this idea makes sense because the shock of death or the need to settle a score or to get retribution may be enough energy to keep the spirit of a human manifested into the spirit world.

Also there are different types of haunting. There are ‘intelligent’ haunting, where the spirit attempts to communicate either through sounds or by moving things, or a signal, possibly related to the poltergeist. There is also the situational haunt which is where the spirit relives the same actions over and over, it becomes familiar to the energy of the area.

There are measurable ways of detecting spirits, through electronic devices. Its not necessary to use Ouija spirit boards to ghost hunt anymore. The most convincing evidence that I have found is the EVP recording, that records the voices of spirits.

All of this is very fascinating to me, and it almost provides a scientific explanation of what happens in the afterlife. My idea is that there is NO heaven or hell..and this is why so many spirits and ghosts are left behind to haunt the physical. After they pass away they are expecting to go to that afterlife but they are unprepared to spend their existence as a spirit. The energy of a person or animal is imprinted in the places where it resided during life. This energy is what allows the spirit to be sustained. The longer the energy stays there the more the spirit will manifest.

Maybe people also add to the energy of the spirit, by interacting with it and giving it energy, either mentally or emotionally. It all comes down to energy and how it manifests. I think there are reasons why spirits exist and there are reasons why they haunt certain places. There is a reason why there are so many spirits now, and these spirits are restless or in distress. Because there is no heaven. They didn’t get what they were promised and they have no peace, no where to go.

Heaven is of course a convenient lie and it has left so many of these spirits stranded. I do not believe that this spirit afterlife is eternal. When a spirit goes ‘towards the light’ or is helped to the other side, it is dissipated and it no longer exists as a collective energy. The spirit is ‘stuck’ between worlds as it clings to the things that influenced the spirit during life.

Of course these are all just theories. The ghostly afterlife idea is more interesting to me, anyway.. and its something that can be seen, it is known all over the world. The ghost or spirit is an idea deeper than any religion can claim. What if it’s true?

Yes I think that spirits/ghosts are real, or at least, real interesting 😉
Yes, I focus on the here and now and life while I am living.

In any case, if I am completely wrong about the spirit/ghost afterlife, when the time comes, I have lost nothing by exploring this idea.