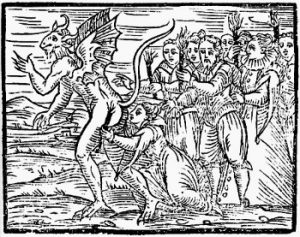 As the image shows in this famous 1500’s woodcut, Christians believed that witches and Satanists would kiss the rear end of the Devil in order to show their solidarity with him. Legends like these are an important part of what Christians believe about Satanists, yet as Satanists we do not have the same understandings that they do. That is because we do not see Satan as the enemy. All the same, it is an important part in the development of the stories of Satan throughout the Medieval era.

There are also images of Holy Popes kissing the devil’s rear. It is known as the ”kiss of shame” – the “OSCULUM INFAME“. In legendary tales this infamous kiss is what sealed the fate of those who chose to walk in line with the devil. This shameful act sought to identify those that were in league with Satan. Unfortunately such things never occurred and they were just urban myths that were spread throughout christian lands, a useful myth that allowed Christians to unite under the cause of destroying what they thought was Satan’s work here on this earth. In the end, all they did was destroy each other.

Perhaps it had to do with Christian’s continual obsession with associating the body with either saintly or sinister things. Consider how holy the body of Christ is to Christians. The image of the pallid, dying savior on the cross, his body tortured beyond belief, yet he lived. He entered into the underworld through the cave and rose three days later on what was later to become a celebration of Easter. This holiday was symbolic of the coming of spring, and the ending of winter. It was adopted from earlier religions and created into a christian story.

Christians really thought that sweet scents and pleasing scents were more divine than those scents that are repugnant or repulsive. We see this in their association of brimstone [sulphour] to Satan, which bubbles up from below the earth and does indeed stink. In this way the Christians weren’t much different than their pagan predecessors in using environmental associations and the body to describe their religion.

In this we see a map of heaven and hell, and their two entrances. Speak the name of Christ and ye shall be in heaven – kiss the ass[hole] of the devil and be eaten by it’s vicious mouth after death. The ‘Osculum Infame’ was not just a kiss on the cheek of the ass; lets just say that it was supposed to be placed where it counts most! Gross,eh? Its an ugly and improper thing to suggest in general..but then again if you are bedfellows with the devil, whats to stop you from committing an act like that to show that you are indeed in league with Satan?

Of course it bears repeating that this is a Christian notion rather than a notion of modern Satanists. To be a Satanist is not a shameful thing. Perhaps Christians see us this way, but they have been taught to hate those kinds of things.

Throughout history, Christians are rather infamous for suggesting the most horrible things possible about those who aren’t part of their religion, such as cakes made of babies, and candles made of their fat, or the ritual slaughter of animals for their blood to use as a drink during rituals.

Of course none of it was true, but the main purpose was to defame, demonize and insult people of other cultures. This relates especially to the Jewish, and the Christian stereotype of the Jewish looking Satan, including the use of the goat as being symbolic of sin. This type of subversion was further discussed in my other blog post, Symbols of Satan, The Pentagram and the Goat.

So as you can see, the Osculum Infame may identify what is Satanic to Christians.. But for us, as Satanists its just another lesson in how their prejudice and demonization of others has affected the world for centuries. During the medieval era it was a subversion tactic that served Christians well.