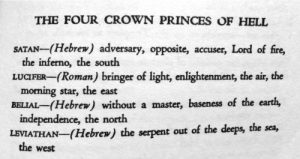 Written in the Satanic Bible, in the fourth chapter of the Book of Leviathan, LaVey gives associations for the Four Crown Princes of Hell, along with the corresponding directional associations. He does this so that in the Book of Belial, chapter 5, these directionals and elements are used during the Thirteen Steps of Satanic Ritual.

But, where did these associations come from and why are they used in LaVey’s Satanic Ritual? Are they correct associations?

The original inspirational source for the Four Crown Princes from the book, came from The Sacred Book of Abramelin the Mage.

This book was first published in 1898 by S.L. MacGregor Mathers, who claimed to have translated it from the original Hebrew. The author claims that this book originated from Abraham, Son of Simon.

The book is a collection of magical spells and instructions on how to summon demons for various tasks, such as finding treasures, creating war or enmity, and the recovery of stolen things. The Book of Abramelin was also a formula for preparing for and evoking the Holy Guardian Angel, a concept that is popular in western mysticism and ritual magic.

According to the story of the book, Abram of Worms, the book’s original (supposed) author, reveals the magical secrets of kabbalism to his son Lamech. The ‘translated’ text of Mather’s has a chapter that is devoted to the damnation of all other magical books as heretical and false. What is interesting, as AE. Waite mentions in The Book of Ceremonial Magic, is that this text is not as old as it has been claimed to be.

According to the research of Waite, there are too many modern assertions and references for this book to have been around any earlier than the 18th ct, and that it is “..full of Christian references and allusions to late grimoires“.

Some of the references and methods in this book were partly inspired by Weirus, and the Goetia, of which the earliest perfect example of the Goetia exists in French translation, from the 17th ct.

Here is the text from the Sacred Book of Abramelin the Mage, Book 2, ch. 19: “The Conjuration and Control of Spirits”

THE CHIEF SPIRITS.
Lucifer: From Latin, Lux, Light, and Fero, to bear, – A Light Bearer. There is a name
“Lucifuge” also employed occasionally, from Lux, Light, and Fugio, to fly from, – He who
shuns the Light.
LEVIATAN: From Hebrew, LVIThN (usually written Leviathan instead of Leviatan), –
the Crooked or Piercing Serpent or Dragon.
Satan: From Hebrew, ShTN, = an Adversary.
Belial: From Hebrew, BLIOL, = a Wicked One.

This is the text from The Satanic Bible, Book of Lucifer, ch. 4 “Hell, The Devil, and how to Sell your Soul”

THE FOUR CROWN PRINCES OF HELL
SATAN – (Hebrew) adversary, opposite, accuser, Lord of fire, the inferno, the south
LUCIFER – (Roman) bringer of light, enlightenment, the air, the morning star, the east
BELIAL – (Hebrew) without a master, baseness of the earth, independence, the north
LEVIATHAN – (Hebrew) the serpent out of the deeps, the sea, the west

Originally, these were called the ‘Four Superior Princes, and Spirits’, in the book of Abramelin. In the footnotes of Abramelin, Mathers points out that the number four represents the four Familiar Spirits that are to be invoked “,.. one for each of the Four Elements of which Man is composed, ruled by the Holy Name of Four Letters, IHVH, Tetragrammaton.”

The Operation of Abramelin, a ritual utilized by the Golden Dawn, and Crowley, describes the method of invoking these spirits using talismans and prayers, as a means of ridding one’s self of negative influences, in order to prepare the way for communication with the Holy Guardian Angel.

It’s also my theory that the Hebrew lettering that was used in the sigil of Baphomet [LVIThN] by LaVey, was derived from the interpretations of S.L. Mather’s Book of Abramelin. What interests me is how LaVey used a psudeo-Judaic Christian grimoire to derive his ritual associations, by using these names out of context to suit his own needs, to invoke the powers of Hell.

References:
The Book of Ceremonial Magic, A. E. Waite
The Book of Abramelin, S.L. MacGregor Mathers
The Satanic Bible, Anton LaVey
Notes on The Abramelin Operation
The Holy Guardian Angel: Exploring the Sacred Magick of Abramelin the Mage. Aaron Leitch