Interesting question from a Youtube viewer of mine. He asks about the altar setup and it’s requirements in LaVeyan Satanism.

I am a practicing LaVeyan Satanist. I have never done a ritual, but I am eager to do so. Here’s one thing I am hoping you could tell me though. Is it necessary to have a woman as an altar, like LaVey suggests? Because I think that will be the most difficult part…

Laveyan Satanism is centered around symbolism. part of this symbolism is the figure of the nude altar. this was in part inspired by the tales of the black mass, practices of wicca, Crowley and the gnostic mass, Golden Dawn, and other occult ceremonies that use the priestess as the focus of the ritual. The priestess is adored, and worshiped as a manifestation of the divine feminine. This is the type of ritual or ceremony that is done for a coven or congregation, by a priest, priestess and other officials of the church or grotto. Because of this, it is meant to be done with more than one person, each fulfilling their part during the ritual. The woman acting as the altar was used during the black Mass, a mockery and inversion of the catholic rite that LaVey put into a modern context, not for occult reasons but as a show, to symbolize the needs and desires of man.

As a solitary worker you don’t have that option to be able to do that. but this does not necessarily mean that you have to cut out the feminine element from your ritual. you could incorporate imagery or anything else that reminds you of that element into your altar setup. A suggestive statue of a demoness, for instance, or some other type of art that is pleasing and suggestive, can add an interesting theme to your ritual.

Because you are into LaVeyan practice, ritual is meant to be symbolic, whether its performed by a grotto or in person. so use whatever symbolism is appropriate to you. what is the focus of your ritual, what is the ritual’s purpose or meaning? knowing this will enable you to see what types of imagery, music and statues that you may want to use during your ceremony. As the only operator of your ritual you will have to decide how you are going to carry out each part. i suggest that you take up both roles as priest and priestess. it’s not required but something like this can be an interesting experience and more fulfilling than just acting from the role of the priest. in a typical ritual of this type, the priest says the invocations and the priestess offers the cup or Chalice.

I discuss the history behind this concept of using a Woman altar, in my essay for the book, ‘Women’s Voices in Magic’ since it is a central theme to LaVeyan Satanism. I also touched on the subject in my essay ‘Satanic Witchcraft‘ from my website, spiritualsatanist.com. In my view, LaVey may have just been reacting to the sexual attitudes of his era, emulating the tales of the black mass, and opposing the strict sexual and moral values of the Roman Church.

See Also: The Black Mass – What is the Purpose 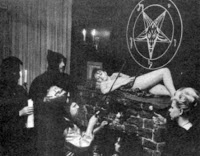