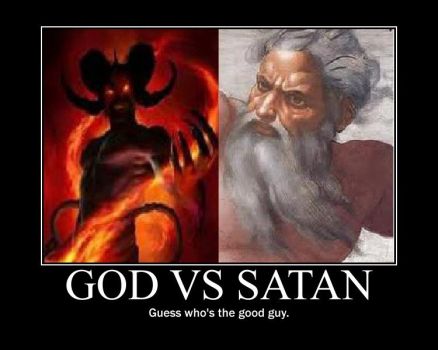 A reply to a very touching letter sent by a fan, and a discussion on duality in Satanism. This letter was not easy to reply to but this reader had a very serious issue. As she is new to Satanism, I wanted to offer some of my advice to her.

..I have read a good bit on your website, and I have watched many of your videos. I am fascinated by Satanism, and especially your ideas on Independent Satanism. But I am fairly new to all this. I became a Christian when I was very young. But in recent years I have become repulsed by Christians and the church. I see no value in associating myself with either. At the same time I find myself very much attracted to Satan.

Yet I still feel pulled in two directions. What I read about Jesus makes it hard for me to hate him. I don’t see the same bullshit coming from him that I see coming from Christians and the church. So I would like to know if it is necessary for me to denounce Christianity, that is to denounce Jesus Christ, in order to practice Satanism.

I feel like I am falling in love with Satan. Yet I still respect the words of Christ. From some of my reading, it seems that most satanists really despise him. Any insight into my dilemma would be appreciated. Hail Satan.

I do not believe that you have to hate Jesus in order to be a Satanist. Now, I’m waiting for the mail to pour in because of that statement, but allow me to explain.

The hatred of Christ by Satanists has a long history. Even before LaVey made his church and declared that Satanism should be a practice and a religion, the Christians created a reputation for Satanists that included rites that transversed Christianity.

You can read stories like this in books such as ‘LaBas’ (Huysmans), and ‘Satanism and Witchcraft’ (Jules Michelet). Authors like this drew from the tales that were used during the witchcraft trials. They included morbid scenes of black masses where the (defrocked) priest would trample on the host, offer unholy sacraments and assist the priestess who was usually described as a street-whore or a former nun. Other rites included horrible things like using baby fat for candles In reading these tales you may think that there were some people who did some very morbid things in pursuit of denying the church.

Why would the church make up horror stories like this? For authors like Huysmans it made them a lot of money through sensationalism. It enabled the Church to create an environment of fear, where they were able to gain control. It allowed for the witch trials to happen and many died, needlessly. Their propaganda enabled them to have social control. The early church also did not want the competition from Jewish society. Many Jews were killed, labeled as witches, their holy ‘Sabbat’ becoming the witch’s unholy sabbath.. The tales the christian writers created were centered around these ideas. It worked for a very long time.

Even LaVey, who had the most social control over popular satanism, created an environment that focused on denying the Christ-figure and embracing the ways of Satan. Much of that was influenced by anti-Christian rhetoric of philosophers. It seems that since then, it has become almost traditional for Satanists to behave in this way.

I take a different view. I accept that there are many gods in this world.

In my article, “My Advice on Leaving Christianity“, I try to take a neutral view in suggesting how to leave that religion. I do not see a need to waste emotional energy on hate. That is why i suggest to this reader that if she wants to leave Christianity, then she should, but its not required of her to hate anything.

In Satanism, it is useful for some to mock or ridicule their former beliefs, as that enables them to subconsciously break with the former beliefs of the past.

If she finds that the majority of her Christian friends are actually hypocrites according to what they are supposed to be living by as Christians, then maybe she will be able to see that their way of life and their religion is a moral ideal, and that very few people in this life will ever achieve this perfected ideal.

I would not blame this on the god, but i would place the blame on the people within that religion who refuse to take responsibility for their own actions. Of course, I am not a Christian so it is not my place to judge.

Satanism in general is more accepting of the human condition and that is why there is no need to restrict the self to moral conditioning. That is why as a Satanist she may be able to see this ‘hypocritical self deceit’ that others continually choose to accept as a way of life. She may have to transition from an accepting and faithful way of life, to a more modern rationalist humanist approach. Some never make that transition and they merely invert the values of Christianity. Even though the story is inverted, they never leave the sphere of Christian influence.

Overall, her biggest issue is going to be the situation of duality.
Accepting Christ is fine but according to the Christian tradition, there can not be room in one’s heart for both god and Satan. There are generally no rules as to how Satanists accept other gods, but generally from a Satanists point of view the Christian god would be either:

1. nonexistent
2. Denied, hated or reviled;
3. The eternal enemy of Satan
4. tolerated as the god of others who are Christian.

wanting to love Jesus and Satan at the same time, while being dedicated to Satan is a noble thing to do. I do not think it would be easy. My suggestion to her that she examine her motives and sincerely explore whether she is ready to leave Christianity or not. and if she is, then she is free to leave it behind without hating it. If that decision is too much to handle or her Christian belief in Christ prevents her from doing it, then she would be better off returning to her god and praying for forgiveness for straying from the path of Christian righteousness.