This post explores some of the advantages in Satanism, and disadvantages of Satanism. These are common ideas that you will find in Satanism that we all have to deal with at some point. So what are the benefits and drawbacks of being a Satanist? 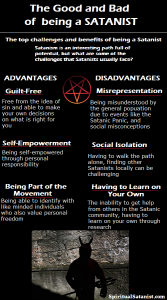 Advantages of Being a Satanist:

Being free from Sin!

Once you leave Christianity (and many Satanists come from a Christian path) you are free to live without the guilt of sin. For some this is an incredible relief. But for others, it can be difficult to leave behind the ways of thinking that held you back for so long.

Either way, Satanists aren’t burdened with the guilt of the Christian idea of sin, and this is something that not many paths can offer. So, enjoy your new found freedom, hopefully it will enable you to discover your true inner self.

It is often said in Satanism, “Responsibility to the responsible”, meaning that you have to take responsibility for your own development in Satanism. This is not easy to do if you have spent years being told what to believe and how to act by your former religion.

Being Part of the Satanic Current..

Once you become a Satanist you enter into a new religious movement that is constantly evolving with the times. Unlike static archaic religions, Satanism is dynamic and always changing. You can be a part of a path that offer something new to learn and discover every day.

People in Satanism are working to currently change the pubic perception of this path through social outreach and positive media exposure. Honestly, it’s exciting to be a part of that!

And now, for the downsides of being a Satanist. It’s not all as good as it seems as new Satanists often find out.

You’ll be Misunderstood, Wherever You Go

Yes, thanks to centuries of Christian propaganda, you will be misunderstood by the majority of the population. With the recent media exposure of Satanism in a popular light, attitudes are slowly changing. But until then you will have to deal with what is called, “Christian privilege”, where Christians believe they have the right to define how society should live.

If you live in the United States, enjoy your religious freedom but be prepared to fight for it.  You will  have to decide if coming out is the right choice for you and your job and family life. See my article: Hiding Your Satanic Faith From the Public

Another disadvantage in Satanism is that we, as Satanists, are not so fortunate to be able to have meetups in every city and town in the world. While Satanism is growing it is still very much an underground movement. The best we can do in most circumstances is meet up with other Satanists online. Satanism has organizations all around the world, but they aren’t brick-and mortar churches.

In my post here at the Spiritual Satanist Blog, you can read why Satanism does not have Churches, explaining how it is not possible to have actual churches in Satanism.  But that does not mean that Satanists do not meet up – in this day and age, arranging a meetup is quite easy through social media.

Having to Learn on Your Own

It is generally accepted that Satanism is the path of the self. Therefore, you won’t find that others are generous with their knowledge. As a new Satanist, you won’t find that other Satanists are readily willing (or able) to help you learn about Satanism. Take a quick glance at any Satanist forum and you will find that new Satanists who ask questions about Satanism are often brushed off, treated badly or simply told to go find out the answers for themselves. This can be frustrating to new Satanists but obviously, that’s what we all went through when we first started out.

You have to take it upon yourself to learn as much as you can, on your own. Ask questions carefully and research before you ask. In coming from a Christian background you may expect others to lay everything out for you and tell you what to believe, but that’s not the way it’s supposed to be. If you don’t know where to begin, most Satanists will tell you to read the Satanic Bible. That’s a good idea if you want to get a general idea of some of the common philosophies in Satanism.

So as you can see, there are challenges and benefits in Satanism. Before coming out as a Satanist you should consider them carefully. These are some of the common situations that I’ve experienced along the way in my own personal journey, and in talking with other Satanists. Yes, Satanism is a tough road and at times you will feel like you are all alone. But, know that you are not. There are many other Satanists in this world going through the same issues and emerging stronger and better for the experience.

What do you think some of the advantages and disadvantages of Satanism are? Feel free to add to this post in the comments below!