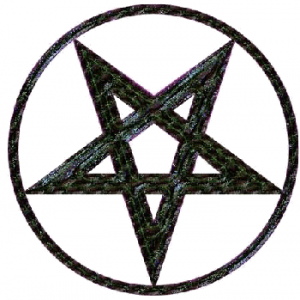 “Personally I think you need to take the pentagram off, that a discrase to all pagans and wiccans alike. I am wiccan, We do not belive in satan nor the christains “god” but we are not satanists, So please Do use our scared symbol to make people think that anyone who wars it is a satanist.”

– from a youtube user that identifies as Wiccan, in a private letter to me

As Satanists we encounter this type of discussion from time to time. I can understand her point of view – how she believes that Wiccans created the pentagram and that Satanists took it from them and inverted it. I also think that this point of view is typical of those who haven’t done the research on the symbols of their path. This belief is found within the Wiccan/Pagan crowd to some extent. But, as I’ve said, an explanation of the history of the pentagram in Satanism may give others a better idea of what it represents to *both* groups.So, I wrote this person back with this letter:

Greetings;
The pentagram is a sacred symbol to wicca, that’s true. It is a symbol of the second degree gardinerian witch.

It is also used within other magical practices such as Satanism and the Left Hand Path.

The inspiration for this pentagram was derived from the book written by Maurice Bessy [A Pictorial History of Magic and the Supernatural], based on an earlier pentagram design created by Oswald Wirth, almost 20 years prior to the publication of the Satanic bible.

Anton LaVey, the creator of satanism, made the use of the pentagram as a satanic symbol, from these sources.

From this, I hope that you can see that LaVey did not invent the pentagram, or invert it from the associations of Wicca. He was, instead, inspired by other earlier sources which labeled the inverted pentagram as ‘evil’ or associated with witchcraft, and the image of Baphomet.

Both symbols are not unique to satanism or wicca; The pentagram with the point downwards was a symbol used by the ancient Greeks [pentemychos], representing the knowledge and wisdom that comes from the underworld [us satanists symbolize this as the power of the elements found within, or from below]