I love having a Satanic chatroom. It allows me to talk to people from all around the world about Satanism. I have co-hosted the Satanity chatroom for about a decade now, so I’ve had an opportunity to meet all kinds of people who are interested in Satanism. People want to know about the expectations vs. realities in Satanism.

I’ve met people who were just curious about what Satanism is, and Ive also met those who want to become serious and take the next step. It always surprises me and makes me laugh a little bit when I here some common tropes about Satanism being asked in the chatroom. Most of them fall into the typical Hollywood Satanism stereotype. Here are 5 of them in an expectation vs. reality scenario.

Reality: no, I can’t recall knowing any Satanists who sacrifice animals. In fact, I’ve never met one in my life. I have two cats and an eclectus parrot, and I love them all dearly.

I also foster a neighborhood cat named Tabby who hops around on three legs. He deserves a good home even though he’s still wild after a year of feeding. Animals are more connected to nature than we are. That seems kind of sacred to me, since I feel that Satan is a part of wild nature.

But, what purpose would animal sacrifice serve, anyway? In many instances throughout history it has been used as a way to appease a god and it may be consumed in a meal.

Outside of Satanism religious animal sacrifice is protected by the constitution. It is practiced in the Santeria religion, a religious syncretism or blend of Afro-American and Roman Cathlocisim, where the animal is consumed afterward in a meal.  There are several other religions that practice sacrifice who are protected under the humane slaughter act in the United States.

The idea that Satanists sacrifice animals can be rooted in the Satanic Panic, and ideas created by Christian leaders who claimed that Satanists were killing animals. However, most Satanist literature doesn’t promote the idea of animal sacrifice. Satanists who participate in these kinds of things are following along with a Christian idea of Satanism, and Christians are obviously not an authority on what Satanism is or what Satanists do.

I would also be concerned if sex was a a part of an initiation ceremony. Throughout my two decades in the occult, I’ve heard at least two personal stories of Wiccan and pagan leaders who took advantage of young initiates in that way. It could happen in any kind of occult group setting with the wrong kind of leaders. It’s just ethically wrong, no matter what religion it is.

While LaVey didn’t speak for all of Satanism its a common sense general guideline that seems reasonable to many Satanists.

If you want to hook up with someone, you’re better off just trying a dating service instead. No one will think you are weird for that.

Reality: Yeah, right. The human Satanic sacrifice. Well I guess it wouldn’t be a Satanic themed movie without some unwitting people stumbling onto a Satanist circle in the middle of the woods on the night of a full moon – then subsequently being hunted down for a human sacrifice. The thing is, these are fictional movie portrayals. It’s not realistic at all.

How dull it would be to have a movie showing that Satanists don’t bathe in human blood, sacrifice babies or stab virgins in the heart on a sacrificial altar? That would be one boring movie indeed. Hollywood’s duty isn’t to tell the truth, otherwise you would be watching documentaries on Satanism instead of fictional thrillers. Hollywood’s profit comes from sensationalism. Its Hollywood’s equivalent to clickbait.

Expectation: Satan’s gonna make me rich or famous! Where do I sign?

Reality: I’d like to know too. Maybe then I could afford a lavish lifestyle, you know, get that new Benz. 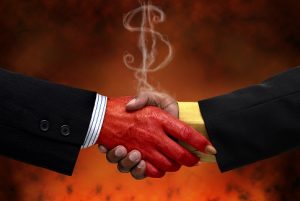 I am not aware that Satan or any other god just hands out money. If it were that easy don’t you think everyone would be doing it?

Free money sounds great, and it plays on the basic principle of greed. But people who promise to make you rich through Satan are just making themselves rich. Consider yourself scammed.

Once again, it all goes back to the conspiracy theory that people who are rich or powerful attained their wealth by making a deal with the devil.

What Satan and Satanism can really do for you however, is make your life better by making you responsible for your own actions. Maybe if you actually get out there and try, instead of praying and hoping, you can succeed. Sometimes you need to put yourself in a different situation so you can thrive. These are the things that you need to do on your own, they aren’t magically handed to you. I always say, Satan helps those that help themselves.

Some say the greatest gift that Satan can give to you is knowledge. Satanism can help you refocus your priorities in a beneficial way. Hell, any system can do that for you – its just all in how you use it, but it’s just more edgy with Satanism and it requires some self motivation and self introspection. And, Satanism is not meant for everyone.

Expectation: God wont listen to me, maybe Satan will..

Reality:  This one is a bit tougher to answer. if you are turning to Satanism out of desperation, you might want to rethink your strategy. Nothing good comes from desperation. 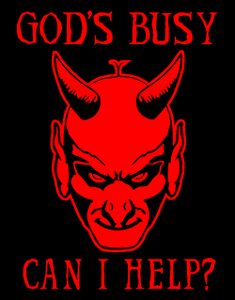 provide to you a better way of living by giving you the freedom that you need to be the best person that you can be. You can live a life free from sin and guilt by realizing that you can walk away from Christianity. But until you are ready to change your mindset, you will enter into Satanism expecting to have the same rules, ideas and relationship with Satan that were handed to you as a Christian.

Perhaps you’ll be paranoid thinking that you’re going to end up in the Christian hell. Maybe you will expect that Satan wants to command you in some way. Maybe you will think that Satan is evil, like the Christians say. Well, these are not the kinds of things that most Satanists believe or have experienced with Satan after they walk the path for a while. You have to put aside all of your assumptions and beliefs when you first enter into Satanism.

Satanism isn’t a final destination, its a journey, and what you experience in that journey is up to you. You will have to learn the Satanic way, and it takes time to do that. Some people are lazy and just want an easy way out. That’s why Satanism isn’t for everyone, because from the outside it seems like it would be the easy way out but the reality is, its one of the most difficult paths to walk in the occult.

For some people, taking the time to read, learn and explore is more work than they feel that it’s worth, so they are better off just staying with Christianity.  With Christianity they can just sit back and let their god do the work for them, ‘put it in gods hands’. They can be taken care of and they can lead a life without making any difficult decisions.

Was any of this surprising?

As you can see these are some of the common scenarios I discuss with people from time to time in the Satanity chatroom. Sometimes people are disappointed when they find out that Satanism is not what they thought it could be. As a long time Satanist, I find these ideas kind of funny, but I always try to think that the people who don’t know any better are just seeking some advice. Who knows, maybe someday these myths about Satanism will be long gone in the past, and people will have a better understanding of Satanism overall. We can only hope.

Speaking of hope – I hope everyone had a wonderful Helliday weekend! Happy Krampusmas from Venus Satanas & SpiritualSatanist.com! 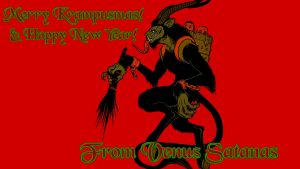 What do you think are some of the most common myths about Satanism? Let’s discuss!